Last night my Sis Jay of Epegamedia (http://www.epegamedia.com/ ) PR infvited me andsome friends to the latest addage to the Proud Dynasty of Upmarket but edgy Galleries on the King's Road!

Great space on the main road of one of London's most recognisable streets.

It was beautiful Photo Exhibition by Tom Hanley of beguiling life of Beatle John Lennon......

My favourite photos from this great and illustrous Photogrpaher were of the Legend that is Jimi Hendrix!
Posted by Baba at 14:51 No comments: 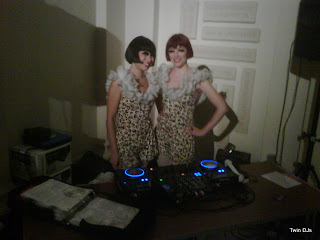 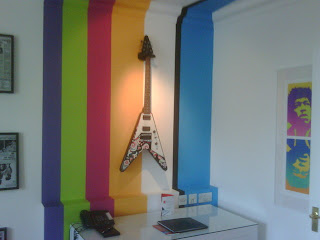 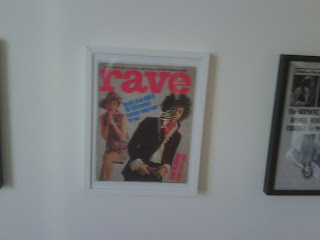 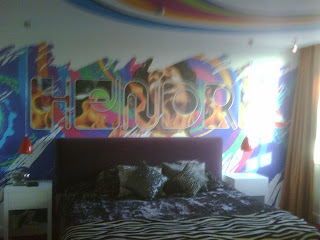 On our 2012 Olympic accommodation trail seeing hotel rooms and setting up deals I went to the holy grail of bedrooms for me. Jimi Hendrix styled room at the Cumberland Hotel.
Exhausted from the rigours of touring, besieged by hangers-on, worn down by his own drug use and unsure of where his career was going next, Hendrix was in need of sanctuary.
In the four years that Hendrix lived in London, he would stay in any number of hotel rooms, furnished flats and boltholes.
He lived with his girlfriend Kathy Etchingham in a flat at 23 Brook Street – next door to the house where Handel had lived and where he composed Messiah – and once described it as "the only home I ever had".
But the Cumberland was his private redoubt – a place to which he would often retreat to find privacy – and to conduct his hectic and often complicated love-life.
As Keith Altham, a music journalist who became Hendrix's friend and confidante, puts it, the Cumberland was where Hendrix would go "for the purpose of meeting various young ladies when he wanted to keep away from the various other young ladies that he was seeing".
The hotel is also named on Hendrix's death certificate as his place of residence. He died on the morning of September 18 1970 from an overdose of barbiturates in the room of a girlfriend at the Hotel Samarkand in Lansdowne Crescent, Notting Hill.
Nowadays, the Cumberland is a luxury hotel, its reception area a huge expanse of marble and glass, bathed in lime-coloured light, with a Gary Rhodes restaurant attached. In Hendrix's day it was somewhat more louche, a favourite with rock musicians passing through London, with "running hot and cold hookers" in the bar, as Altham remembers.
To mark the 40th anniversary of Hendrix's death, the Cumberland Hotel has styled a special "Jimi Hendrix suite", on the same floor, the fifth – if not the same room – where the musician stayed.
An accurate reproduction of Hendrix's suite would probably be furnished with G-Plan furniture and a candlewick bedspread. Instead, the designers Mary Gannon and Cynthia Garcia have fashioned a contemporary version of the psychedelic Sixties, as they put it, to "capture the ethos of Hendrix, and ultimately be a sanctuary where Hendrix himself would enjoy spending time".
Primary-coloured op-art lines swirl across the ceiling; there are zebra-skin throws, fibre-optic lights, framed pages from the music papers of the period, and a huge mural of Hendrix by the artist Andie Airfix dominates one wall. It is a fun experience, if not exactly an authentic one, lent a particular poignancy by the film of Hendrix flickering on the large plasma television screen – "a little big to throw out of the window", as Garcia puts it, and by a tape of Hendrix's last-ever interview, which was conducted by Altham in the musician's suite on the afternoon of September 11, and which is available for guests to play.
Hendrix's voice echoes across the years – rambling, gnomic, amused. At the end of the interview, Altham asks whether he has now amassed enough money to be able to live exactly as he would like to.
"Ah, I don't think so," Hendrix replies. "Because, like, I want to get up in the morning and just roll over in my bed into an indoor swimming pool and then swim to the breakfast table, you know, come up for air and get maybe a drink of orange juice or something like that. Then just flop over from the chair into the swimming pool, swim into the bathroom, and you know, go and shave and whatever…"
You want to live luxuriously? Altham asks.
"No! Is that luxurious? I was thinking about a tent, maybe," Hendrix laughs, "overhanging a mountain stream."
A week later, he was dead.
Posted by Baba at 10:01 No comments: 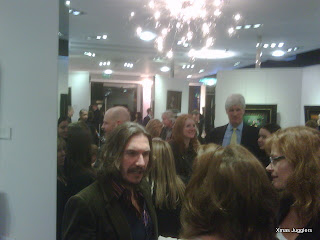 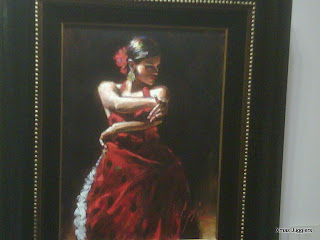 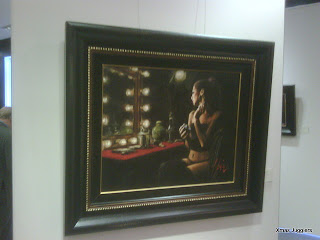 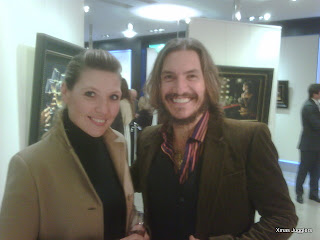 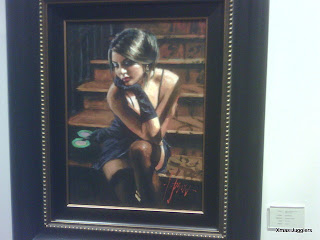 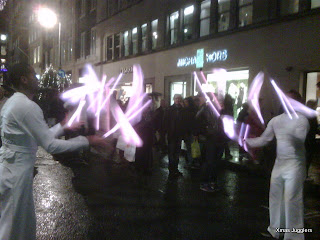 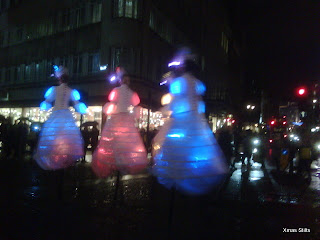 Oh where would we be without Xmas. On my way to an Art Exhibition to meet a lovely client from Polo Ralph Lauren I was caught in the throng on Bond Street that awaited the Xmas lights being turned on by Lisa Snowden. Using sidestepping skills that where most useful in my Rugger years ( oh how I miss those salad days) I managed to manoeuvre myselft through the crown to my destination private view at the Clarendon Artt Gallery in Dover St of new works by Fabian Perez, official artist to the Latin Grammy Awards, Vancouver Olympics and the London 2012 Olympics.
This important exhibition represents one of the largest and most diverse collections of Fabians' paintings ever to be shown in the country. It offers collectors a unique opportunity to acquire both new works and a small number of pieces from the artist's personal portfolio, at a time when his work is in huge demand.

Passionate work, nice guy and thanks for the invite cousin Tayo x
Posted by Baba at 09:42 No comments: 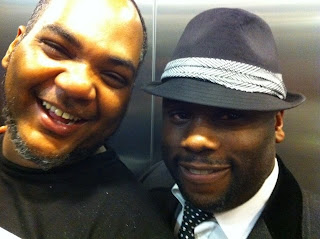 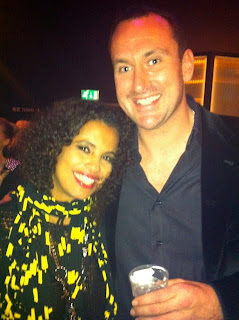 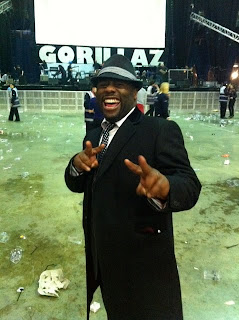 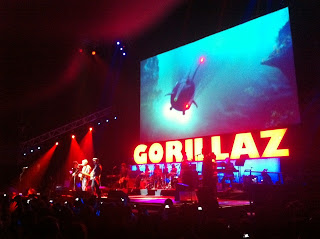 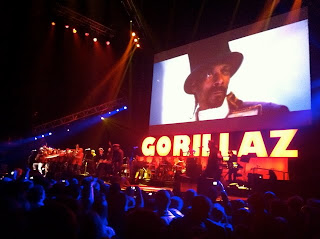 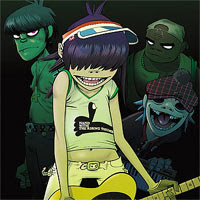 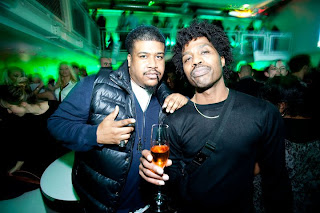 November in previously years had been the lull month before the tsunami wave that is December in way of Events & Parties. But this year November has been busy with Client events, 2011/2012 Conference Planning and invites to some very interesting VIP Events. None so much as the Gorrillaz featuring De La Soul Concert.

I was honoured to be invited with VIP Backstage passes to one of the most futuristic and enchanting concerts I have ever been to. The vision of of genius songwriter & producer Damon Albarn along with artist and designer Jamie Christopher Hewlett is breathtaking. The songs were awesome, the cartoons were memerising and the After Party was delicious. Thanks Smiles (Manager of De La ) for your continued friendship & support. Shame the fog delayed the Boys flight back from Amsterdam so they missed a large part of the show. What a visionary collaboration it was though......Bobby Womack, Neneh Cherry & Brown from Farside to name the main - Good luck with the MONSTER tour and see you on the other side! Thanks for the love :-)
Posted by Baba at 09:29 No comments: