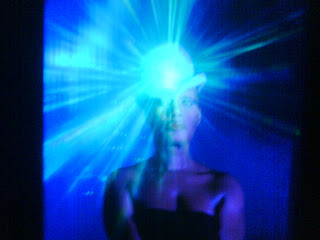 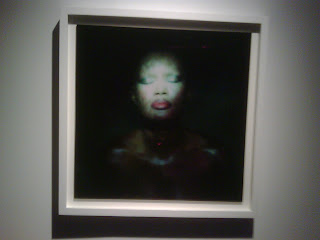 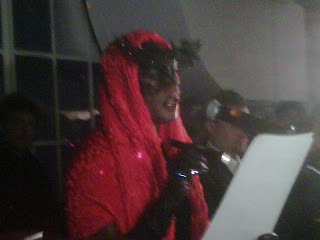 Just before I went Scuba Diving in Tenerife with my Beau we were invited by the one and only Dr Nastro to Chris Levine's Portraits of the Legend Grace Jones "Pull Up To The Bumper" . Seeing as she has been an inspiration of mine since my flat top days, when I had hair; I had to be there. Mad queue was deftly bunny hopped thanks to Reena and Raffi at the Vinyl Factory. Forgot how fly this Venue is. Great for launches. Needless to say I was not disappointed as Miss Jones was as inspirational and unique as ever. 60 years young and still tight and beautiful as ever. Great to meet such a person who has transend time and frontruns style. WE LOVE YOU GRACE !!!! Must catch her Gig!!!

FROM SPOONFED ART- "Who would dare to copy Grace Jones? Lady Gaga apparently. 2 weekS or so ago, news emerged that Jones had turned down the opportunity to play live with Gaga because, as Jones told the Guardian: "I'd just prefer to work with someone who is more original and someone who is not copying me, actually.” Ouchies!

I only mention this because the thought of someone copying Grace Jones' performance this evening is really not one worth considering. We're at the Vinyl Factory, a massive industrial sort of space underneath a rather unpreposessing record store in Soho, at the launch party of Stillness at the Speed of Light, an exhibition of portraits of Grace Jones by contemporary light artist Chris Levine. After hours of gradually building excitement, Jones arrives, surrounded by subordinates and cameras. Sporting a black lace eye-mask and long Red Riding Hood-style cloak, Jones struts to a stool, sits down, pulls the microphone towards her, and...no, alas she doesn't start singing; she reads a poem. A really long poem. It's not quite what we were all hoping for – as the background chatter escalates, Jones declares in no uncertain terms, “Fucking shut up! Or leave!” Can't imagine Gaga doing that huh?
Anyway, it's all good fun, and the Chris Levine's work here is really cool. Levine is probably best known for his portrait of the Queen from a couple of years ago. Striking and beautiful, it was hailed by Mario Testino as "the most beautiful image of Her Majesty I have ever seen". Which is rather nice. Most of the works on show here see a sparkly-hatted Jones given the Levine light treatment. I have no idea how he does it, but the results are like disco holograms that shift and shimmer as you move around them. The highlight for me is a piece that at first glance appears simply as a verticle strobe light. But then just as you look away, an image of Grace Jones flashes into your peripheral vision. Moving your head from side to side, the image repeatedly flashes up and then disappears. It's impossible to get a firm focus on – it just keeps dodging away. Grace Jones – as her unexpected performance this evening demonstrates – just won't be pinned down."