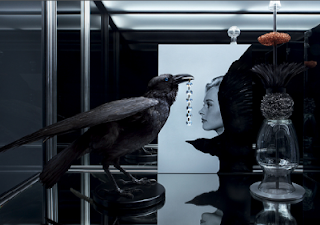 On Tuesday a good friend who happens to be one of London's top curators invited me to the Josephine Meckseper's 1st solo exhibition at Timothy Taylor's Gallery in Carlos Place. The New York based Artist showed her slant on neo-modernism with consumerism with the Hitchcockian piece being my favourite.

This beautiful cubic space filled with pieces reflects the excessive consumerism of our times!!! Good work Bomi - Thanks for the invite & bonne chance to all involved in the Frieze Art Fair. Good on you Deutsche Bank!!

Deutsche Bank is the main sponsor of Frieze Art Fair for the eight consecutive year. The art fair takes place in London’s Regent’s Park from October 13th to 16th. Deutsche Bank will announce the “Artist of the year 2012” at the fair. Once again the bank is using the fair to present works from its substantial corporate collection.

In its lounge, Deutsche Bank will hold a small exhibition of three conceptual artists, Nedko Solakov, Roman Ondák and Yane Calovski with the aim of demonstrating the importance of passing ideas around. There will also be works on display by the Chapman Brothers, Samuel Fosso, Ivan Grubanov, Damien Hirst and Gavin Turk for a charity auction event in aid of War Child on Thursday, October 14th.

In a short time, Frieze Art Fair has developed into one of the world's most influential contemporary art fairs. The declared aim of both, the organizers and Deutsche Bank is to make contemporary art accessible to a wide public.
Posted by Baba at 09:39 No comments: