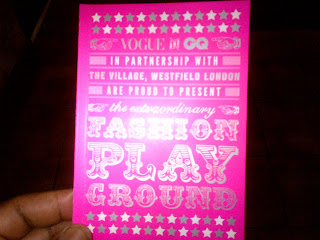 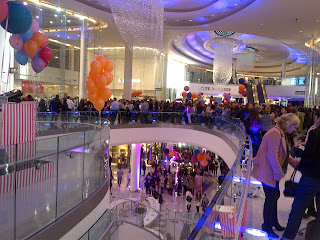 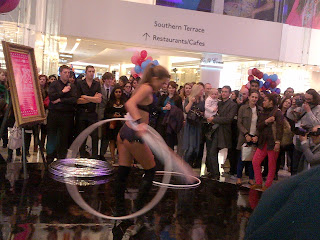 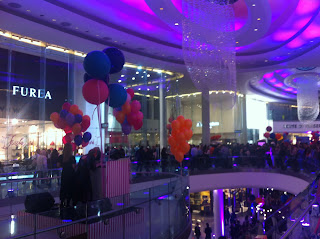 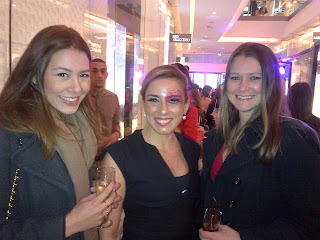 On Wedneaday eve, Baba, Mo & myself had the pleasure of attending one of our cherished client’s functions at the GQ and Vogue Fashion Playground event in The Village, Westfield Shepherd’s Bush. For those unfamiliar with Westfield (you must be hiding under a rock if so!) the Village was transformed into a fairground complete with contortionists, magicians, mind-readers, balloons, candy floss, popcorn, food and drink including tunes spun by DJ Mademoiselle Robot.

Visited by a staggering 4,300 people on the night, guests were invited to shop at high fashion labels at discounted prices including Louis Vuitton, Tiffany’s, Whistles, Gucci, Jimmy Choo and Versace to name a few. Overall a great success to our friends at Westfield!

Thanks for the invite & hope to see you soon ;-)

Written by Anita Engebretsen
Posted by Baba at 08:15 No comments: 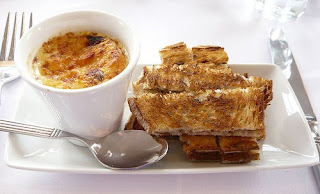 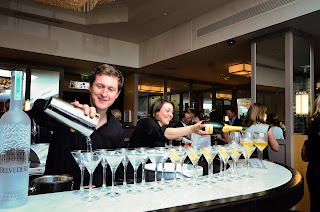 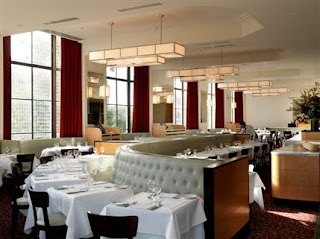 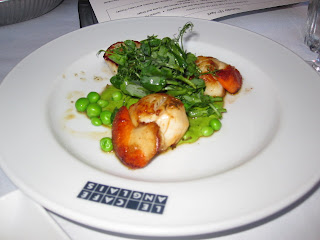 Le Café Anglais, Whiteleys Bayswater - Nestled upstairs away only an olympic hammer throw away from Kensinton Park Gardens in Whiteleys, Bayswater is the beautiful Anglo French restaurant, Le Café Anglais. After a short lift upstairs, you step into what is a romantic yet relaxed, art-deco, family-friendly restaurant that serves some of the best seasonal foods this side of London.
Run by Head Chef Rowley Leigh, the restaurant has had some recent refurbishments including the installation of an Oyster bar. Here guests can comfortably sip on champagne and indulge in some fresh, just- shucked oysters before dinner or for your dinner, if you’re the kind of person after my own heart.

The restaurant has its own rotisserie and is known for dishes including parmesan soufflé with anchovy toast, whole grilled scallops, roast meat and game. Needless to say there is something for everyone here. During the Olympic weeks, the restaurant is launching a games-inspired set menu which includes Duck and Foie Gras Terrine with Pickled Cherries, their signature Roast ‘Label Anglais’ Chicken with Chanterelles, and Petite Bouillabaisse of Monkfish and Red Mullet with Croutons and Rouille to name a few. Again, all seasonal produce prepared in a uniquely French-Anglo way.

But sacre bleu, what you won’t find on the menu (for now) is deep fried snails paired with a buttered garlic sauce!

The main restaurant can accommodate up to 200 people for a function. The private dining room comfortably seats up to 26 people or up to 50 people standing for drinks and canapés. It fabulous for family get togethers, corporate functions or birthday parties to name a few.

What is undeniable is the quality of food at Les Café Anglais, to enquire for best seats and availability please contact us now at 0203 468 3901 or email concierge@emc3.eu .

Wrtten by Anita Engebretsen
Posted by Baba at 11:09 No comments: 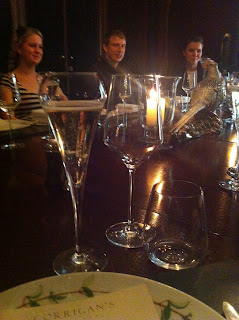 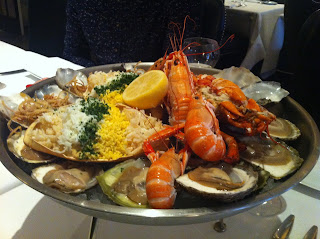 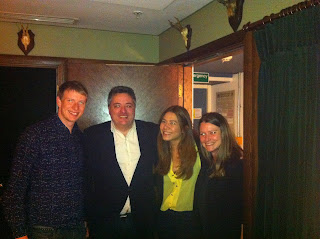 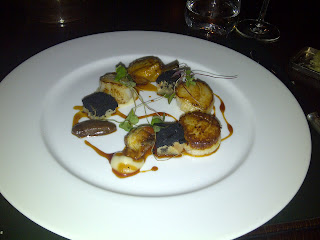 As regular readers of the EMC3 experiences blog will have gathered by now, one of the top perks of working for EMC3 is being invited around the capital to sample the very best in restaurants, bars and venues that London has to offer.

This week was a particular highlight when our whole team was invited for a visit to two restaurants. First stop was Bentley’s Oyster Bar and Grill near Piccadilly Circus – here we were met by the excellent hostesses Amy & Victoria and given a tour of the restaurant. The highlight of which was the incredibly spacious self contained private dining room in the basement that can sit up to 60 people for dinner and includes it’s own bar area with piano – a great and unique space.

After the tour we were led to a laid table in the upstairs restaurant and before we barely had time to settle into our seats, platter after platter of the most succulent looking seafood and meat starters began to arrive to the table. As the girls exchanged glances of ”so much food” us boys tucked our napkins in and examined the offerings with beady-eyed delight!

The platters were generous and the food cooked to perfection – 3 types of oysters, lobster, crab, langoustines, seafood cocktails, beef tartare, ham, smoked salmon and calamari - all accompanied by a variety of freshly baked bread from the bakers downstairs (including some incredible soda bread and sourdough) and washed down with champagne... And this was just our starters!!

Our hosts and waiters did an excellent job of explaining every dish and soon after we piled into two taxis and headed round to stop number two... Corrigan’s of Mayfair
After a quick drink at the exceptionally well stocked bar, we were brought through the kitchen to the highly desirable chef’s table and introduced to our next host: Sheldon who talked us expertly through the menu.

Now earlier in the evening at Bentley’s, Amy had told us that they were offering squirrel dishes at Corrigan’s, not fazed by it not being on the menu tonight, Sheldon went and spoke to the head chef who sent his team scurrying around to bring us a taster tray of squirrel canapés – amusingly in a nut sauce!

We were lucky enough to have the very special treat of a personal visit from the top man Richard Corrigan himself who welcomed us to his restaurant and told us about some of his next upcoming projects – you’ll have to keep an eye on the EMC3 Deal of the Week emails for more details of these in due course!

The main courses arrived in extremely good time and we all sat back with mouths open and eyes open wider as we took in the spectacular presentation of the food. The slow roast duck was the most popular, then the braised short rib of beef. I opted for the scallops which were wonderful and accompanied by some tiny smoked chicken wings and celeriac. Not a single bad word was said about any of the food and Sheldon returned a short while later to 10 gleamingly empty plates.

As well fed as we were, the hospitality didn’t end there – miniature desserts followed, then teas, coffees and cheese plates then port and limoncello !
We all left Corrigan’s beaming from ear to ear at the exceptional levels of service and even higher quality of food. We had the perfect hosts and will certainly recommend both restaurants to everyone we know looking for fine dining in the West End!
Written by Phil Harris, Performers & Production, EMC3 Ltd
Posted by Baba at 15:07 No comments: 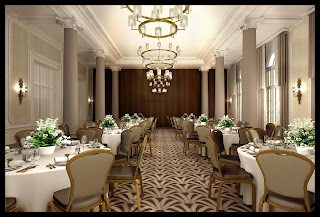 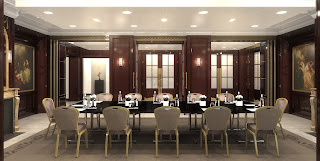 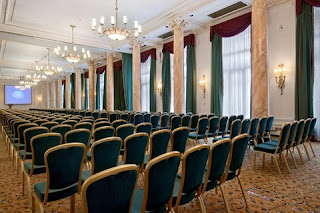 2 Fridays: Mo and I headed over to the Waldorf Hilton to see the newly refurbished Adelphi Suite. I wasn’t expecting that much of a difference. Normally, hotel refurbishments mean taking the same canvas and painting over it. A little spackle here, some paint there and it’s done, but we were amazed!

Talk about a transformation! With a hotel as elegant and sophisticated as the five-star Waldorf Hilton, it’s good to see they finally have an event space to match! The staff was super accommodating, as per usual, and the events team was more than willing to show us every exciting feature the entire hotel has to offer (including their macaroons, I thought I had died and gone to a macaroon heaven better than Laduree!)

They took us throughout the main lobby area of the Hilton, into the executive board room, and the restaurants. The ballroom area, including the Adelphi Suite, with all of the spaces utilized can hold up to 800 guests, which seems like a lot of people, but with a space this immaculate you can definitely tell why someone would be inclined to have a booking that large in this space.

The walls are absolutely stunning; the large columns add character to the space that breathes class and elegance. They’ve changed the drapery from a dark green and burgundy that was hard to blend in during events, to a lovely cream colour that is sophisticated and chic. Not only does it look like this in the grand ballroom, but it carries over into the Adelphi Suite as well. It’s amazing just how well all of the spaces can be utilized and how versatile they truly are. They’ve replaced the gold and green carpet with a lovely chocolate and cream that blends in nicely. The Hilton staff really made great use of the space, sectioning off half of the suite for a theatre style set up for 50 people and the remainder of the space set as a round table dinner, with elegant dinnerware and immaculate chandeliers. This space, including the grand ballroom, is truly one of a kind equipped with LED colour changing lights to suit any theme or clients preference, with a Hilton staff that is just as unique.

If you have any questions about booking the newly renovated Adelphi Suite or any of their spaces please contact us!

Written by Taylor Hathorn, Intern from University of Tennessee, USA
Posted by Baba at 15:37 No comments: