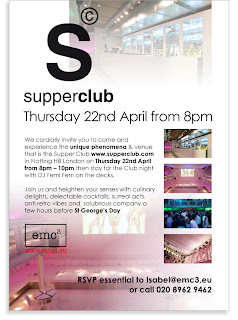 Click on image to enlargen.
Website www.supperclub.com
Come and join us on the 22nd April from 8pm to experience the phonomenon that is the supperclub !

“ The most fun I have in bed with my clothes on " Ben Grant, - a supperclub regular.


Opened at the beginning of December last year, supperclub London combines the many avant garde, risqué and occasionally provocative elements that have made the original site in Amsterdam world-famous and inspired so many other concepts across the globe. Whether it be the food and drink, unique eating style, music, performances, DJs or visual art, supperclub London is every bit as innovative, unique and daring as those who have visited the site in Holland, opened 17 years ago, would expect.

As owner Bert van der Leden explains: “Every night is different. Whether it's the food, music, performances, art, personnel or the guests themselves, a supperclub evening is only a success if all five senses are stimulated. You can be yourself here, and let yourself go.”

The original supperclub was started by a group of young creatives taking over an Amsterdam warehouse in the late 1980’s to view each other’s art. Lacking furniture, they brought in their own mattresses, the beginning of the eating concept. So inundated were the original group that Bert van der Leden decided to give everyone an opportunity to partake in the creativity and decadence of the space and opened to the public in 1992.

The UK supperclub opens on the site of another legendary institution, Subterranea – the nightclub that defined clubbing in London in the 90’s. Located under the Westway, at the more funky end of Portobello Road, supperclub’s edgy performances and sometimes challenging spirit recreate the air of urban chic Subterranea was famed for, an evening out that is as exciting as it is memorable. Leave your day to day life at the door and allow yourself to be swept away into the freedom of the night.

“London’s clubbing heritage and vibrant passion for art and fine dining, makes it a perfect supperclub city. Londoners have long subscribed to our mantra - If you just want to look you should go to the theatre, at supperclub, you make the experience,” added van der Leden.

Food and Drink
Renowned for eating on beds, with no a la carte menus or multiple ‘seatings’, the four-course tasting menu, priced at £45 can be enjoyed for the entire evening. As one would expect from such an innovative and creative organisation, the dishes served at supperclub London are as exciting as the club itself, with no compromise on quality, tried and tested flavour combinations.

Music, Performances, VJs and Art
Naturally, music plays an incredibly important role at supperclub, and with over 1 million compilation albums sold worldwide, the reputation of their djs is unsurpassed. The supperclub djs around the world continuously exchange ideas and tracks to create a recognised supperclub sound, and add their own, local flavour. Whilst video projection in nightclubs may now be commonplace, it was supperclub who originated this idea, aware that music with moving images makes a deeper impression than without. As well as music, the creative forces behind supperclub feel that performance is at least as important as the music and the food. The performances are varied and always novel, showcasing some individuals that are recent discoveries and rising stars and others that have already held exhibitions in all the great world cities or have performed in leading clubs.

supperclub has already established itself as one of West London’s leading hotspots, frequented by stars including Robbie Williams and his fiancée Ayda Field, Lily Allen, Jaime Winstone, Cat Deeley and James Corden at the EMI post-Brits after party. Other high profile clients who have recently visited include Jade Jagger, Rhys Ifans and Matthew Williamson.
Posted by Baba at 09:24 1 comment: