Week-End Bliss At The Square Restaurant 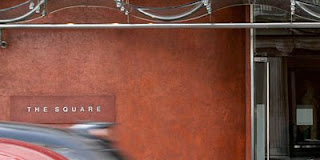 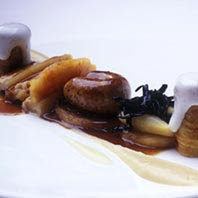 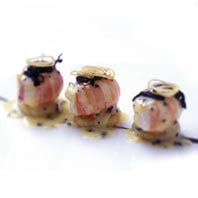 What a glorious week-end non? Sun, my niece in her school's rendition of the musical Bugsy Malone, snacks at shoreditch house, a juke box jam at the Tavern Arms in Aldgate East and most delectable dinner at the Square. Over the last 9 years I have had a the pleasure of planning a few private dinners for Clients in their private room: but never have I had a pleasure of sampling it's culinary delights. A dear Friend and I have started a dinner club with our lovely wives when once every couple of months we take them out to some of London's off the beaten track unique restaurants. Being as well heeled as he is; he has now uped the ante and suggested the Square. Being a man of very finite means I hesitated ( credit crunch and all). Although I was ready to pay my half he kindly settled the bill by saying " You two more than compensate for the bill with your company Babs". Glory be to God - there are still angels that walk amongst us. For a couple who,"live under their means": a bottle of Laurent Perrier Rose with every couse was not only decadent but most heavenly. EE & SE we salute you XXX!!! The food was mouthwateringly awesome - I had the freshest Tartare of Veal with Grilled Asparagus, Berkswell Shavings, Pea Shoots and Tuna Cream for starters. For main course I had the Herb Crusted Saddle of New Season’s Lamb with Spring Carrots,Mint Jellies and a Jersey Royal Foam. For Desert, in which I don t usually indulge, I had the Crème Brûlée with Grapes and Sauternes which stunned me back into the world of sweets. Stef had the Roasted Pears with Caramelised Wafers, Salted Caramel Foam and “Dulche de Leche” Ice Cream..... tastebud explosion! If you're flushed and want to treat or be treated then I most wholeheartedly recommend the Square for a most veritable meal!!

The Square http://www.squarerestaurant.org/ is the sister restaurant to The Ledbury, based in Notting Hill, London.Owned by Philip Howard and Nigel Platts-Martin opened its doors in King Street, St. James' in 1991.

Seven years later it moved to its current location of Bruton Street, Mayfair. The Square, its food, its wine and its owners have amassed a multitude of awards and accolades along the way. Most recently, the restaurant won the BMW Square Meal 'Restaurant of the Year 2007' for an unprecedented second year and currently holds the Which? Good Food Guide's 'Best Wine List 2008'.
Posted by Baba at 09:37 No comments: