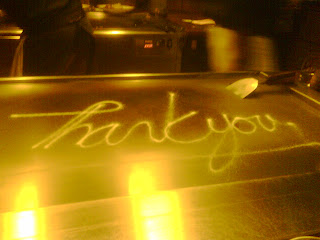 Who says we can't throw F*** Off Events, Award Shows & Concerts ? Who says we can't turn a Monster Event around in 1 month? Who says this country needs more outside influence to enhance our brand? No one....Oh it's only me then! Should have got me and my team involved Guys.....even in the planning alone!

Although the Event was a Landmark in Events I felt a little disappointed in the fact that if the brains behind this project had been able to meet earlier, plan more meticulously, rehearse more in depth and follow a set and unified plan this would have been one of the GREATEST Events put together anywhere in the world in 2010. Although I felt it was a success it was only a Landmark Event in my eyes.

Verily I say, I was truly gulpy & honoured to be amongst the likes of our 1st President Seun Shagari ( Great speech by the way Sir!) , Super Magnate Dangote, Property Developer Chief Hope Harriman ( Dear Uncle & Ex Business Partner Of my Father Dr Ben Epega) , Dr. Mike Adenuga Jnr & Olorogun Oskar Ibru. But I couln't help but have the sense or feeling that attendees President Bush Jnr & Prime Minister Blair were making a undertoned mockery of our Great Nation in one way or another by being there. No sooner had Presidendent Bush finished his Pepper Soup were the Secret Service Bods signalled "Wheels Up" and they were off on their private jet back to Texas without as much as an adieu- See the video.

The true respect must go to newspaper genius & magnate Nnduka Obaigbena of "THIS DAY" who managed to step in and take control of the proceedings whilst steering it once more at the right pace and in the right direction. Where did they find that half Naija- halfYankee Presenter who couldn't even pronouce President Oluṣẹgun Mathew Okikiọla Arẹmu Ọbasanjọ . Nice but dim girl - no such thing as LUCK it's L.U.C.K.......practise makes perfect!

Notwithstanding I must give a standing ovation once again to the enigma that is Condi Rice , for her resounding speech, and the This DayTeam ( Fauzi, Nadya & Helen especially) for putting together a better than average event under such pressure and with such security loose cannons. Lots of people getting paid far too much for doing nothing though....

I must say though:

Who else dares to take Nigeria to the forefront of media? Who else dares to bring such International Dignitries to Aso Rock or Ajegunle. Who else can cuss such men to their faces and laugh? Do I have any takers ? Well until we do I would like to say "Nice One THISDAY & Guru Nnduka" - Thanks for putting Abuja once again on the World Map for better news headlines than corruption & lack of emphathy.
More grease to your elbow! Nigeria For Nigerians By Nigerians....!!!!