Good to read how our Clients appreciate our good work :-) 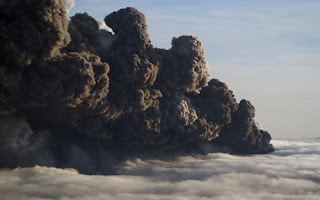 As part of the stranded pack of Americans stuck in London last month after Iceland’s volcano burped, and shut down the skies over Europe, the stranded masses were faced with a common dilemma … how are we ever going to get out of here? The news changed hour to hour. Saturday’s flights were cancelled, rescheduled to Monday. Sundays were cancelled, rescheduled to Tuesday, and so on.

We became increasingly frustrated by the realization that the details of when and how we would finally get home was beyond our control. Rather than just sit by passively and bemoan our condition, I recruited some fellow Skoll World Forum exiles, Drummond Pike, Dave Chen , and Jim Greenbaum, to join me in brainstorming our alternatives. We sized the market to be as many as 250 fellow Skoll Forum attendees, who all felt the pressure (some more than others) to find an alternative way home. So the problem was defined, the market sized, and the search for solutions began. 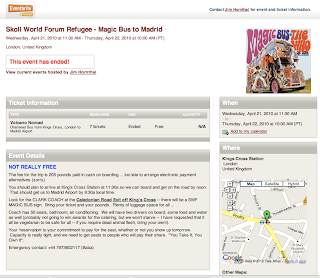 Event Brite Page
We could take a train to Denmark, and a ferry to Iceland (ironically, no flights were cancelled in Iceland, since the volcano was east of the airport, and planes had no problem taking off and landing). Infrequent ferry service made this option a poor choice. A ferry to France and a train to Paris was considered. However, flights from Paris were also at risk, and seats on the EuroStar were quickly sold out. How about a charter bus from London to Madrid? Spain had no problems with the volcanic ash, and a bus with two drivers could make the trip non-stop in about 18 hours, with only brief stops for fuel. 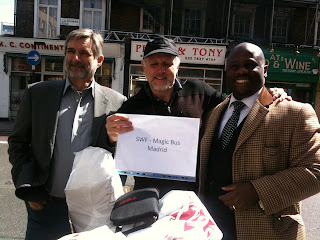 We found a fantastic ground operator, EMC3, that was willing to work with us and had a stellar track record in creating amazing events and support with little-to-no advance warning. We determined that a charter bus with on-board bathroom, food, and two drivers could do the trick, and arranged for as many as five buses at 50 per bus to take our ragged band of weary travelers to a safer harbor.
Monday night, however, a false sense of security set in as people we convinced that flights would be back to normal on Tuesday. So our planned ‘announcement’ at the TEDx Volcano event was tabled due to a rise in apathy and the hope that we would all soon be on our way home.
The volcano had other ideas, and late that night, burped again, triggering another round of cancelled flights. We spent Tuesday reviewing alternatives and considering our options. There was competition (Skoll Forum was rumored to have chartered a bus, but it was then cancelled; rumors of a charter flight also came and went). By Tuesday late afternoon, we decided to take matters into our own hands and committed to find the cost of one bus (to start), and made those arrangements as the business day was closing. To be clear, this was a non-profit social venture; the financial goal was to fairly recover the out-of-pocket costs for the bus, and share it equally among the passengers. If there was a shortfall, we would share in the losses, aided by our friend, fellow castaway, and President of Skoll Global Threats, Dr. Larry Brilliant.
That night, we began the process of marketing, and quickly determined that we needed a back-end system to enable us to reach our community efficiently and effectively. Impressed by the speed at which TEDx Volcano was pulled together, we adopted the same platform – EventBrite. While I wish I had started before midnight, I must say that it couldn’t have been easier for a first-time user to set up the page, and begin emailing our friends who had heard about our expedition. We told people that they should think of this as an insurance policy — a chance to get to Spain by Thursday morning, where planes were actually taking off. By 3am, the site was “live” (what’s a start-up without at least one all-nighter?). We were in business. As emails went out, we were able to watch our reservations like a hot stock going public in 1999. 50 seats available … 42 seats … 35 seats. People calling to put seats on hold. Peter Greenberg called from CBS. They wanted to do a story on the “Magic Bus” and Peter was coming with two people from his crew. Fame as well as fortune ? 14 seats, 5 seats, do we need a second bus? We ended the day nearly sold out on bus #1, with a wait list starting to form. London departure set for Thursday at 1pm. Time to get some sleep and get ready for packing and final day logistics on Wednesday.
Wednesday morning, we awoke to a different landscape. Seems like perhaps the airports were closed unnecessarily. Many test flights were made and came back without any damage, and the industry was crying to get back in the sky. Looks like Heathrow would be open by Thursday morning (just about the time the bus would be arriving in Madrid). People wanted to get out of their bus commitments, but we had already signed the deal with the ground operator. The wait list evaporated, and by the time the bus departure came, there were only 4 people on board. Bus to Madrid – Departure The only saving grace is that we were able to offload most of the food and donate it to a local shelter.
Our failed venture had many earmarks of success, in spite of the time and money spent. I can count at least five major milestones/accomplishments. 1) Four people were able to get to Spain and get home. 2) 46 people slept better knowing they had a “Plan B” escape route for their insurance premium, 3) a local shelter got a generous donation of some great food. 4) Drummond Pike, Jim Greenbaum, and I were able to get back to our day jobs, none the less for wear. And 5) we made it from Start-up to Shut-down in 36 hours — I think that could be a world record!
Posted by Baba at 15:11 1 comment: